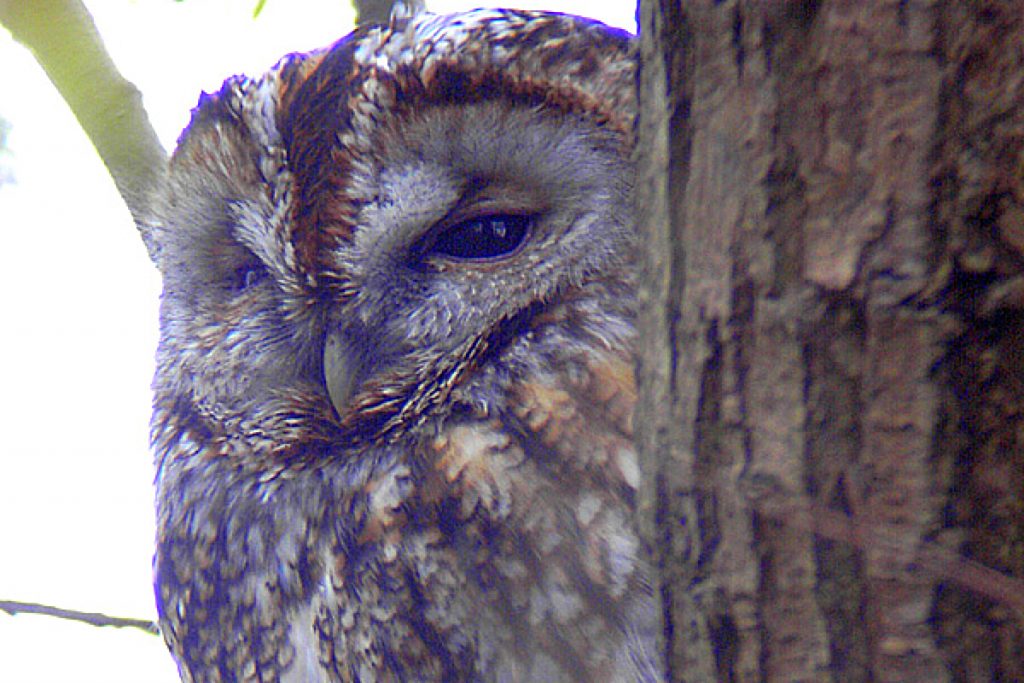 The Tawny owl is by far our most common breeding Owl, outnumbering the Barn Owl by 10-1 and Little Owl by 2/3-1. Adult males and females are alike. Tawny Owls are medium sized owls averaging 40cms in length. They come in two colour forms, grey-brown and rufous-brown. The plumage is extremely cryptic and due to this difficult to locate day roosting birds. The Tawny Owl is large headed, compact bodied, broad winged owl.

Upperparts are rich brown with varying amounts of darker streaking and small white markings on the wing coverts, the underside is also heavily streaked dark and rufous on a paler background.

The Tawny Owls head is large, with Black eyes (only shared by Barn Owl) and horn coloured bill.

The face disc is reasonably plain with darker wedge from forehead to bill.

From bill to forehead the wedge shows obvious pale markings and pale eyebrow like markings on crown.

They often appear ‘bull headed’ and stand very upright at roost and are compact bodied and short tailed.

Juveniles appear from April onwards and once their white down feathers are moulted they look very similar to adults.

The Tawny Owl is a very common breeding resident in the UK with over 50,000 pairs. The Tawny Owl occurs in all counties throughout  England, Scotland and Wales but is absent in Ireland. (A few pairs recently found breeding in eastern Ireland)

Tawny Owls occur in all habitat types throughout the UK, woodlands, parks, gardens, farmland, hedgerows indeed any open country habitat with suitable scrub. They prefer broadleaf woodland for nesting purposes but will hunt by night in many habitat types.

Shopping Cart
There are no products in the cart!
Continue Shopping