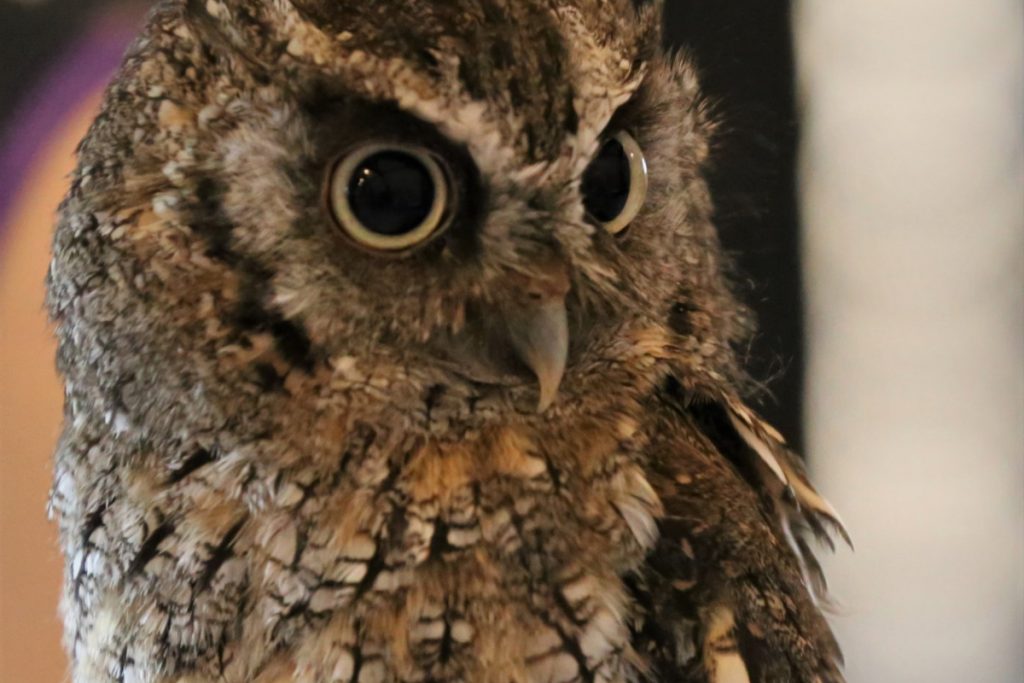 This owl has a yellow iris and a light gray facial disk, with a prominent black border; underparts white with a herring-bone pattern where each feather has black shaft streaks throughout. Crown and upperparts heavily streaked dark; tail and flight-feathers are barred with brown and light buff, the scapulars have a dark-edged pale spots, what give them a white line along each side above the wing. The bill is greenish-grey, feathered tarsus, toes are bare and feet are grey-brown.

This raptor is almost strictly nocturnal, initiating its activities at dusk. During daytime this owl roosts in dense foliage trees, probably close to the trunks like other Screech Owls.

Its main call is a brief trill followed by two louder toots, " gurrrrrrku-kúk".

These owls lay eggs in January - July in Northern Hemisphere; in Southern Hemisphere, the egg laying was recorded in September-October. But males normally sing on August, initiating the courtship period, when both sexes are vocally active. These owls nest in cavities, as natural or old woodpecker holes in trees, but also in termite mounts and nest boxes. Usually about 1-4 white eggs, averaging 34.3 x 29.3mm, are laid on the bottom of cavity without any protection. Incubation is provided by female. In Misiones (Argentina) a male was reported carrying food to the nest. The nestlings are brooded for about a month when the young owls fledge.

Food habits are poorly known. Few samples of pellets and field observations suggest a mostly insectivorous diet, including crickets, katydids, beetles, ants, spiders and scorpions. Preys are mostly nocturnal and live on the ground. Insects can be captured on wing or on the ground. There are observations of individuals catching insects in flight, particularly in the vicinity of artificial light sources, suggesting a learning process. Small vertebrates are also consumed as rodents, opossums, anurans and snakes, but in small proportions. However, in terms of estimated prey biomass consumption, these vertebrates can support 1/3 to 1/2 of the diet.

This species is found in a wide variety of habitats. However, Tropical Screech owls occur mostly in semi-open habitats, like timbered savannah, semi-open areas with scattered trees, forest edges, second-growth forests, plantations, and also town parks. In a gradient of physiognomies from open to woody areas, as the Brazilian savannah, this owl seems to avoid pure grasslands or grassland savannahs with shrubs, preferring patches with at last some trees to woody savannahs. Generally they occur in areas from sea level to 1500m, but they have also been recorded at 3000m.

The Tropical Screech owl is distributed on most of South America east of the Andes from Costa Rica to northern Argentina, east of Ecuador, Colombia, Peru and Bolivia, and all over Venezuela, Guyana, Suriname.