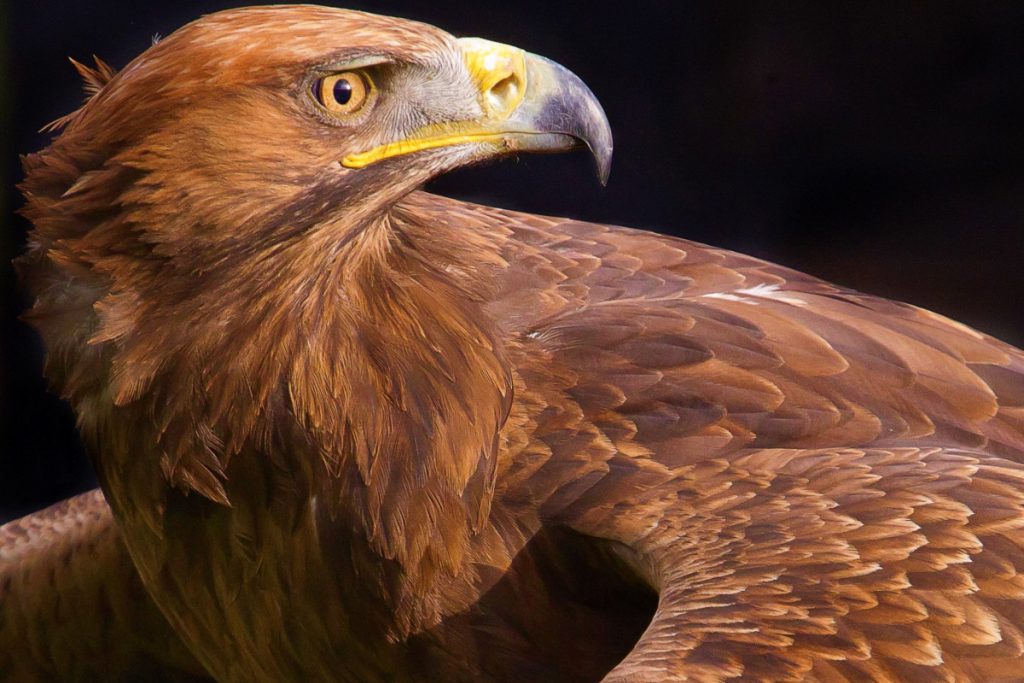 The golden eagle is the UK’s second largest birds of prey and has a wing span of around 2 metres. Males weigh-in at about 3.5kg but females are heavier at about 5kg. Adult golden eagles are predominantly dark brown with paler feathers around the back of the head – giving the species its name. Juvenile golden eagles are a richer chocolate brown with conspicuous white wing and tail patches.

The rugged and remote terrain of the peatlands, uplands and mountains is the haunt of the golden eagle. Originally they ranged over much of upland Britain and Ireland but persecution and modification of their habitat since the mid 18th century has all but restricted them to the wildest parts of the Highlands and Islands of Scotland. A few pairs survive in the hills of southern Scotland but currently there are none in England. There is a project to reintroduce golden eagles to the mountains of Ireland underway at present.

Golden eagles are top of the chain of birds of prey taking a wide range of prey. Typical food includes hares, rabbits, ptarmigan, grouse, deer calves, seabirds and carrion. They require large home ranges in which to hunt and breed and are highly territorial, in particular defending the core part of their home range; this area is their territory. Home ranges and territories are used over many years and some pairs have more than one nest (eyrie) and make alternate use of these. Eyries can be on cliffs or in trees and they become large, bulky structures over the years. Golden eagles rarely breed until they are four to five years old and many birds live beyond 30 years. A clutch typically comprises one to three eggs with two the norm. These are laid between early March and mid April. Incubation lasts 41 – 45 days so that the chicks hatch in late April to early June. The chicks then spend about 70 days in the nest before fledging from July to mid September. The most productive pairs can raise two young but many pairs only raise one. There is a high overall failure rate with the latest national survey recording an average of just 0.36 chicks fledging per pair. UK population: The latest national survey was in 2003 and it recorded 442 pairs. Previous national surveys in 1982 and 1992 counted 424 pairs and 422 pairs, respectively. There has therefore been little change in the overall population over the past 20 years. However, this apparent stability disguises some shifts in the population distribution (e.g. there have been increases in the Western Isles and in parts of Caithness and Sutherland but declines in the central and eastern Highlands.

The Golden Eagle is a magnificent bird of prey.